Constantina Diţă is one of the most successful Romanian athletes of all-time, currently holding the Romanian national road records for the 5K, 10K, 15K, Half Marathon and the Marathon. 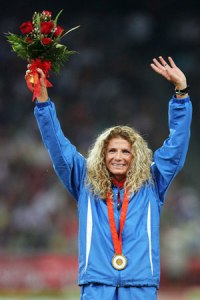 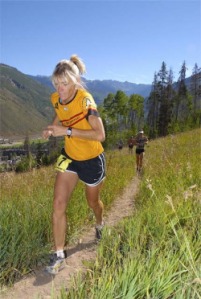 snowshoe racing, competing in over 200 races and breaking 55 records in just nine years.  She has competed on the U.S. Mountain Running team five times, placing highest U.S. finisher four times. She was the Mountain Running National Champion in 2002 and 2003 as well as the Masters Mountain Running World Champion in 2004.  She’s won the Pikes Peak Ascent three times, setting and holding the record time for five years in 2002 in 2:44:33.  Ortiz was also the National Snowshoe Champion in 2002 and runner-up in 2004.  She was named the USATF Female Mountain Runner of the Year in both 2002 and 2003 and the USATF Female Masters Mountain Runner of the Year in 2004.  A kindergarten teacher and mother of four, Anita is still active in the racing community, serving as Board member for the All American Trail Running Association, the United States Snowshoe Association, and coaching elementary students on the Eagle Valley Elementary Running Team.

Priscilla Welch began her remarkable running career at the age of 35, when she quit smoking and took up running under the guidance of her husband and coach, Dave Welch, and ran the 1980 London Marathon.  Four years later, she qualified for the British Olympic team at the 1984 Summer Olympics in Los Angeles, placing sixth in the inaugural women’s Olympic marathon.  On her 40th birthday, Welsh qualified for the Masters division and began setting age group world records.  In 1987, she won the New York Marathon in 2:30:17.  This was coupled with her second place finish in London where she set an age group world record running a 2:26:51, earning the sixth fastest time in the world in 1987, and holding the women’s masters marathon world record for 21 years.  Welch again set an age group world record in the 1988 Boston Marathon in 2:30:48, holding the record for 14 years.  Welch continued to run until a 1992 bout with breast cancer curtailed her career and she moved from her longtime home of Boulder to Tabernash, in the high country of Colorado, later relocating to Bend, Oregon.

One-time phenom Melody Fairchild, now 37, is returning to competition after a 10-year hiatus, hoping to qualify for the 2012 Olympics. (David Zalubowski, Special to The Denver Post)

Legendary runner Fairchild goes for it again at 37  via @denverpost