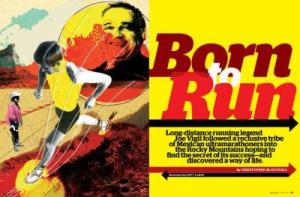 Long-distance running legend Joe Vigil followed a reclusive tribe of Mexican ultramarathoners into the Rocky Mountains hoping to find the secret of its success—and discovered a way of life. Excerpted from Born To Run: A Hidden Tribe, Superathletes, and the Greatest Race the World Has Never Seen, by Christopher McDougall, published by Alfred A. Knopf in May 2009.

Via Stephen Meyers, The Coloradan:

This story is from the Coloradoan archive. It originally ran March 23, 2013.

Q: When did you move to Fort Collins, and what brought you here?

Via Nancy Hobbs, The Examiner:

“Of the five athletes inducted into the 2014 class of the Colorado Running Hall of Fame, three enjoy roots in mountain and trail running. The class was introduced at the Denver Athletic Club on the evening of April 9, by emcee Creigh Kelley, with a special keynote address by Olympic gold medalist Frank Shorter.

Shorter’s address focused on the community of running. “We support each other, we really do. Competing is one thing, but when we turn the switch off, we’re friends,” said Shorter.”

“I had 16 relatives running the Thanksgiving Day run with me in downtown Ft. Collins,” she says. “It’s a 4-miler and I finished right in the middle of my six grandsons, three ahead of me and three behind me. To me, that’s the legacy of having run all this time, that my kids and my grandkids run. I love that. And yeah, I feel older, and yeah, it does get harder. But I guess I’ll keep doing it as long as I can.”

Lidia Simon, a five-time Olympian for Romania who lives in Boulder, won the women’s half in 1:18:01 despite coming down with a bad cold four days ago. Simon recently turned 40.

“For next year I will be masters,” Simon said. “We’ll see, too, if I can keep going with elite runners.”

For decades she was a beloved fixture at Denver road races, helping race organizers in a variety of roles and touching thousands of runners with the sweetness of her spirit. When a cancer diagnosis brought her to the chemotherapy clinic, she would bring gift bags to lift the spirit of fellow patients.

Parthenia “Potts” Jones, who died Wednesday at the age of 61, will be deeply missed by the Front Range running community, by police officers in Aurora and Denver and by juvenile offenders she supervised in Aurora’s probation department.

“Whether it was cajoling young people in Aurora who had run afoul of the law to be wiser, smarter and better human beings, or simply gathering excess donated product after running events and turning those items into a brand new donation to a shelter, she consistently put others’ needs first,” said Denver race organizer Creigh Kelley, a close friend for 30 years. “When you reflect on the definition of a saint, you quickly realize that Parthenia could wear those words as a robe.”

Jones founded the Potts Trotters running club and was inducted into the Colorado Running Hall of Fame in 2011. She worked as an Aurora deputy marshal before joining the city’s probation department. She put on “End of Watch” fundraising races to pay for memorial park benches in honor of fallen police officers, most recently Denver officer Celena Hollis.

“Potts was an inspiration for all of us in how to serve your fellow man,” said Aurora police captain Jerry Hinkle, a friend who attended chemo sessions with her. “She was generous to a fault, both with her time and her resources, even though she was a very humble working-class woman. She had a sense of dignity in terms of how people should live, and she passed it on to her daughters. She passed it on to the kids that she counseled as a probation officer, and she also did that in how she worked with volunteers at the races.”

Jones was diagnosed with cancer of the intestines and liver in 2011. This past February, friends got the grim news that it had spread to her lungs.

“Once the cancer got to her lungs, everything pretty much shut down, kind of like a wildfire,” Hinkle said. “She was becoming less responsive. If you stayed and spent time with her, she would rally over a few minutes or an hour, and you could have a pretty good conversation. Very quiet, very subdued at the end.”

Jones knew she was in a tough fight when she was featured ina story in The Denver Post last April.

“I can’t say I’m going to beat this,” Jones said. “It’s up to God. It’s his will, and he has a plan. I live for him every day. He’s the head of my life. Everything else is after that.”

Hinkle said her two daughters were at her side when she died in home hospice.

“You hope and pray that you live life well, and that when you pass, you pass in the arms of your loved ones,” Hinkle said. “That’s exactly what happened with her. She passed in the way that she would have wanted to.”

A funeral service will be held Wednesday at 11 a.m. at Friendship Baptist Church in Denver.

“My sister is gone to God,” Kelley said, “and my heart aches in the passage.”

Beloved in Denver’s running community, Parthenia Jones, 60, was inducted into the Colorado Running Hall of Fame in 2011 for her tireless work at hundreds of road races over three decades.

“She has the heart of a lion,” said Creigh Kelley, a close friend for 30 years. “Her love just radiates. There’s not a person she hasn’t loved, and hasn’t loved her back. How could you not fall in love with her?”

Now, Jones needs all the love she can get. She is fighting a battle with cancer, and the cancer appears to be winning. Nevertheless, she shines with a peace that comforts those who worry about her.

“I can’t say I’m going to beat this,” Jones said. “It’s up to God. It’s his will, and he has a plan. I live for him every day. He’s the head of my life. Everything else is after that.” 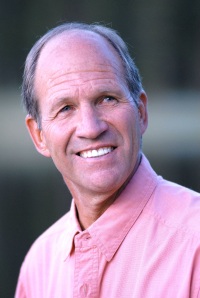 “Initially, I wanted to show people that they can do more than they think they can.”
That philsophy has taken former local resident Marshall Ulrich to every continent on the globe, and next week it will take him into the Colorado Running Hall of Fame.

Road racing great Doug Bell and ultrarunner Marshall Ulrich will be inducted into the Colorado Running Hall of Fame on April 10 at the Denver Athletic Club.