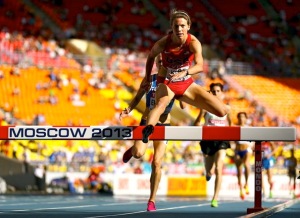 Shalaya Kipp came to the University of Colorado Boulder and competed as a Buff from 2009-2014. During that time, she became a nine-time All American, an individual NCAA Champion in the steeplechase, and the first women in the University of Colorado’s history to be an All-American all four years in cross country (freshman to senior year). In 2012, Shalaya qualified for the London Olympic games.

In 2013, she represented the US at the World Championships in Moscow Russia.

Upon finishing here collegiate eligibility, Shalaya pursued a Masters degree in Physiology from CU, as well as more elite running.

In 2015 Shalaya took home two silver medals for the USA in the Pan American Games and NACAC Championships. In 2016 she finished 4th at the US Olympic trials to become an alternate for the 2016 Rio Games.

In 2018 Shalaya moved to Vancouver British Columbia to pursue a Ph.D. in Kinesiology. She has no plans to quit training and hopes to still be running when she’s in her 90s.